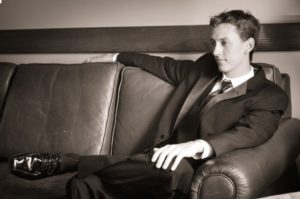 Bobby Frey is a music teacher in Covina California, teaching at Sierra Vista middle school. He received his Bachelor’s of Music Education from the Bob Cole Conservatory. In addition to his major studies, Mr. Frey was the principal trombonist as well as the winner of the 2014 conducting mentorship.

Outside of his work with the bands at Sierra Vista MS, Mr. Frey has taught many schools in California including; East Whittier MS, Long Beach Poly HS, Millikan HS, Los Altos HS, University HS, and Live Oak HS. He is also a drill designer in the fall seasons, having most recently been the program designer for Long Beach Poly for their highest placing finish in SCSBOA finals.

In the drum corps arena, Mr. Frey started as a member of the Santa Clara Vanguard from 2005-2009. He then entered the activity again as a member of the instructional staff for various corps. First with the Colts brass staff in 2010-11, then again as brass caption supervisor in 2012-2013. In 2014, he taught with the brass staff at Spirit of Atlanta. Finally, he joined the visual team here at Pacific Crest in 2017 and again in 2018, in addition to taking on some brass staff responsibilities. He was part of the visual team in Pacific Crests highest placing finish in their history.

When not sharing his passion for music and marching arts, Mr. Frey spends his free time with his mother, four sisters, and four nephews.

Every season, the South Hills High School Marching Band & Color Guard thrills thousands of fans with exciting performances that make this one of the great high school bands in the district.  We are well known for being a close-knit group of friendly, enthusiastic students who bring a little bit of craziness and a whole lot of energy wherever we go.

We invite you to be a part of this outstanding band program and musical tradition.  Previous marching or guard experience is NOT required and NO musical or dance experience is necessary to join the band or color guard, just a willingness to try and work hard.

So whether you are a current musician, never played a musical instrument or have absolutely no experience with color guard, there is a place for you in our family.  Our members come from a variety of backgrounds, however, every new member learns one very important thing the moment they arrive: the South Hills Marching Band & Color Guard is the most accepting and friendly group of student-musicians that you will ever encounter.

Join our family, we’re saving you a seat !